For PM Modi, West Asia more than oil. From Palestine to Oman, all about his 3-nation tour

For PM Modi, West Asia more than oil. From Palestine to Oman, all about his 3-nation tour

The outset of 2018 is proving to be significant in reorienting India’s relations with countries in West Asia. While Prime Minister Narendra Modi is on his four-day visit to Palestine, UAE and Oman, External Affairs Minister Sushma Swaraj was attending the Janadriyah festival in Saudi Arabia as the guest of honour.

Last month, Israeli PM Benjamin Netanyahu visited India and now Iranian President Hasan Rouhani is all set to visit the country at the end of this week.  With a shift in India’s approach from non-alignment to multi-alignment, India has been making attempts to strengthen relationship with the Arab world. Ahead of his visit, PM Modi emphasised the importance of this region and called it a “key priority in our external engagement”.

Ministry of External Affairs spokesperson Raveesh Kumar said the visit to the four countries was aimed at deepening “our multifaceted ties with the Gulf and West Asian region“.

I will be undertaking bilateral visits to Palestine, United Arab Emirates and Oman from 9th to 12th February. The Gulf and West Asian region is a key priority in our external engagement. We enjoy vibrant multi-dimensional ties with the countries there.

The first stop of the four-day visit was Jordan where PM Modi was received by the Jordan PM Hani Al-Mulki in Amman and then met King Abdullah II of Jordan who facilitated his transit to Palestine. PM Modi received by Prime Minister of Jordan on his arrival in Amman.

The Palestinian Presidency, in a pre-arrival welcome statement, described Modi’s upcoming visit as “historic and significant”.  When he reached Ramallah, the de facto capital of the Palestine Authority, Modi became the first Indian Prime Minister to visit Palestine. PM Modi’s visit to Ramallah was seen as an attempt to de-hyphenate India’s foreign policy in relation with Israel and Palestine. In fact, this trip to Palestine comes within a month of Israeli Prime Minister Benjamin Netanyahu’s visit to India where the two leaders hailed each other as strategic partners. PM Modi upon arrival in Ramallah

In Ramallah, PM Modi assured Palestine of India’s support and said “I have assured President Abbas that India is bound by a promise to take care of Palestinian people’s interests.”  Palestine President Mahmoud Abbas said that Palestinians relied on India’s role as an international force to bring peace in the region. Moreover, the two sides signed six memorandums of understanding (MoUs) for the development of Palestine during the short visit.

In a significant gesture, President Abbas conferred PM @narendramodi with Grand Collar Honour, which is Palestine's highest honour, in recognition of PM's wise leadership. PM termed the award as an honour for the people of India. pic.twitter.com/OV9KZiCqjl

Abbas to ask Indian PM for support in replacing US mediation

“In a special recognition of Prime Minister Narendra Modi’s contribution to relations between India and Palestine, President Abbas conferred the Grand Collar of the State of Palestine on him after the conclusion of their bilateral meeting,” the Prime Minister’s office tweeted.

The second leg of PM Modi began upon his arrival at Abu Dhabi where he held talks with Crown Prince of Abu Dhabi and Deputy Commander of the United Arab Emirates (UAE) Armed Forces Sheikh Mohammed Bin Zayed Al Nahyan. 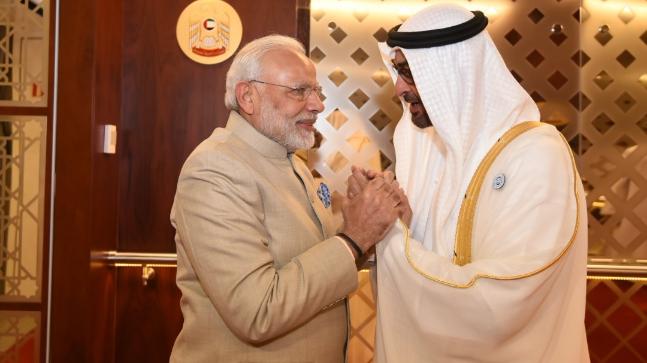 This was Modi’s second visit to the UAE, after the first one in 2015. PM Modi also witnessed the foundation stone laying ceremony of a temple in the UAE via video-conferencing. According to India’s Ambassador to the United Arab Emirates (UAE) Navdeep Suri, this first Hindu temple in Abu Dhabi will come up on 55,000 sq m of land and construction will be completed by 2020.

Five MoUs were signed between the two countries on the areas of energy, railways and employment. To cooperate in the field of manpower, the two sides signed an MoU that aims to institutionalise the collaborative administration of contractual employment of Indian workers in UAE. Under this MoU, both sides will work to integrate their labour-related e-platforms for ending the existing malpractices, combat trafficking and organise collaborative programmes for education and awareness of contractual workers, reported IANS. Modi met Gulf Cooperation Council (GCC) corporate leaders and spoke about the changes that raised India’s ranking in the World Bank Ease of Doing Business index. PM Modi shared the ease of doing business in India with the business leaders from Gulf Cooperation Council countries.

He was addressing business leaders to boost India’s trade and investment relations with the Gulf nations. On Sunday, while addressing the Indian community at Dubai Opera House, PM Modi said, “I assure you that we will work together to bring to reality the dreams you see, here and in India”. He also thanked the Gulf countries, where nearly 3.3 million Indian diaspora resides, for providing them “a home away from home”. After the talks, the two leaders signed eight agreements, which included mutual visa exemption for holders of diplomatic, special, service and official passports. They also signed an MoU on cooperation in the field of health, tourism and peaceful uses of outer space. Another MoU was signed on military cooperation. PM Modi addressing the Indian diaspora at the Sultan Qaboos Sports Complex in Muscat, Oman’s capital, said that India-Oman ties have always remained strong despite the ups and downs in the political environment in both the countries. 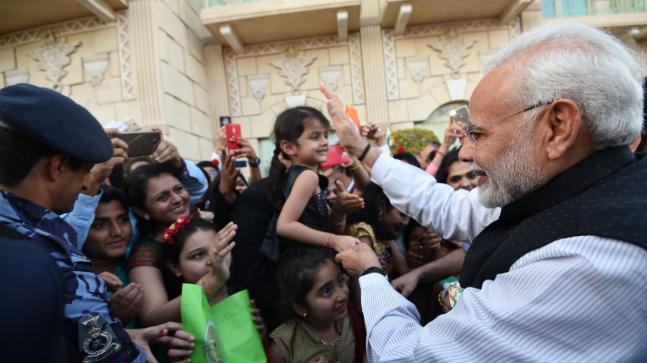 Thousands of Indian expats travelled from different parts of Oman to listen to PM Modi. Indian Social Club (ISC) Sohar executive committee member and general secretary M Rajesh told IANS that the excitement among the diaspora in Salalah, Sohar and Sur was palpable. Over 1,000 people were coming down from Sohar alone, he said, adding that ISC Sohar has arranged for two buses to ferry people to and from Muscat for the event at a nominal sum, reported IANS. He used this opportunity to promote the new National Health Protection Scheme called Ayushman Bharat which Modi said was labelled as ‘Modicare’ by the Indian media.