Gulf crisis expands into the Horn of Africa, and China sits in eye of the storm

Gulf crisis expands into the Horn of Africa, and China sits in eye of the storm

Beijing strategically placed its first overseas military base in Djibouti, an area vital for Chinese exports, but rising regional tensions make it a tough place to do business.

The six-month-old Gulf crisis has expanded to the Horn of Africa, potentially fuelling simmering regional conflicts that could place massive Chinese investment at risk in a part of the world that is home to the People’s Republic’s first overseas military base.

Anxieties about the stand-off in the Horn – a region pockmarked by foreign military bases that straddles key Indian Ocean trade routes and 4,000km of coastline – deepened last month when Sudan granted Turkey the right to rebuild a decaying port city and construct a naval dock to maintain civilian and military vessels on its Red Sea coast.

How Eritrea topped meeting between Djibouti and Ethiopian leaders

The Horn, at the intersection of key maritime passages which include Bab-el-Mandeb and the Gulf of Aden, is vital for the flow of oil as well as Chinese exports. But nations such as Somalia and South Sudan are wracked by political violence, and Yemen, where a proxy war between Saudi Arabia and Iran rages, is nearby. Nevertheless, Beijing understands the region’s geopolitical importance and has made it the focal point of its initial foreign military operations. 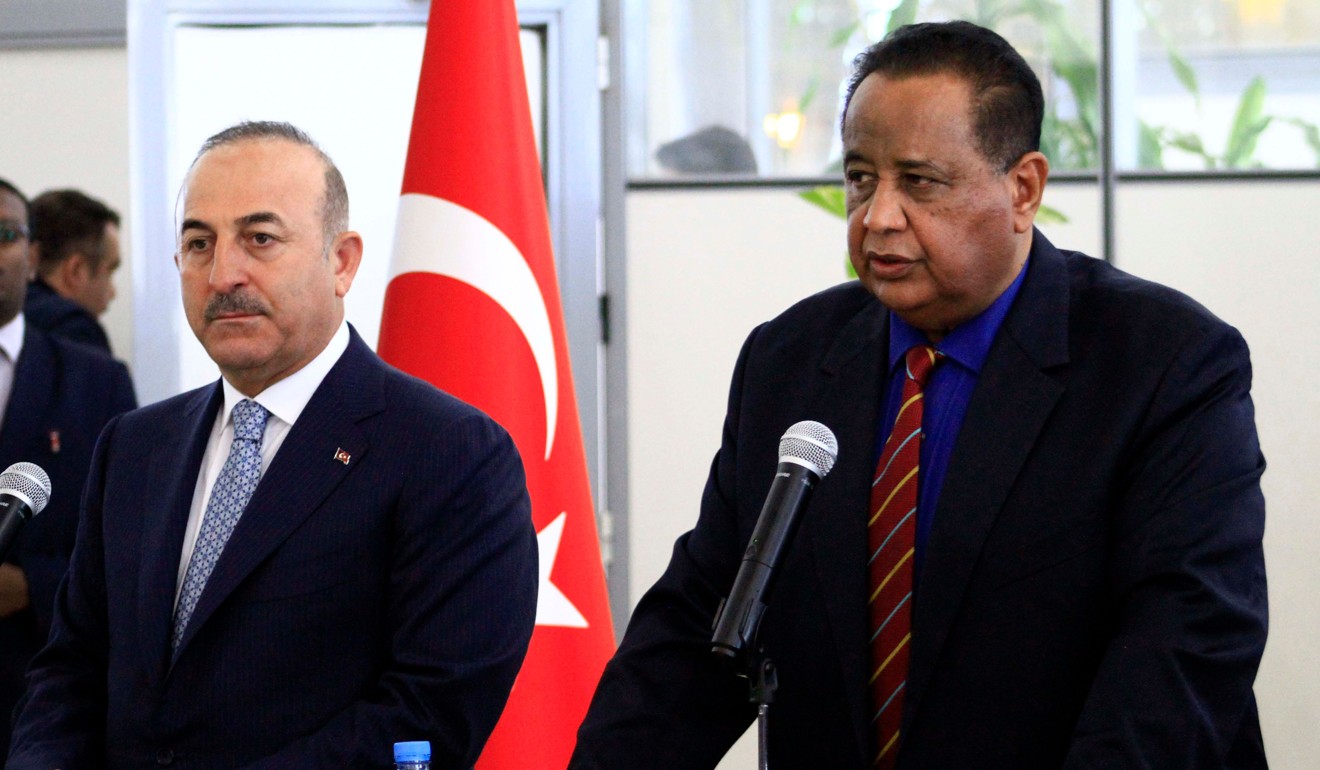 The US$650 million Sudanese-Turkish agreement, which enables Turkey to have a military presence in the Red Sea to help fight terrorism, threatens to exacerbate confrontations and suck China into a myriad of interrelated disputes. Competition for influence between Gulf states stretches beyond the Horn and East Africa into the Sahel as well as Central and West Africa. Qatar’s emir, Sheikh Tamim bin Hamad Al Thani, toured six West African nations last month to shore up support for his country in its dispute with other Gulf states.

Africa is not only a Gulf battlefield but also a theatre for the fierce rivalry between Saudi Arabia and Iran, a sectarian struggle between Sunni and Shiite Muslims primarily fought on the continent in countries like Nigeria, Senegal, Cameroon and Mauritania.

The Sudanese-Turkish agreement suggested the rivalry may come to play an increasingly influential role in the Horn’s geopolitics. Both Saudi Arabia and UAE worry about Turkish military expansion because of its close relations with Iran and support for Qatar. Turkey has a military base in the Gulf state and intends to expand its presence to 3,000 troops in coming months. Turkey also has a training facility in Somalia and is discussing the establishment of a base in Djibouti. 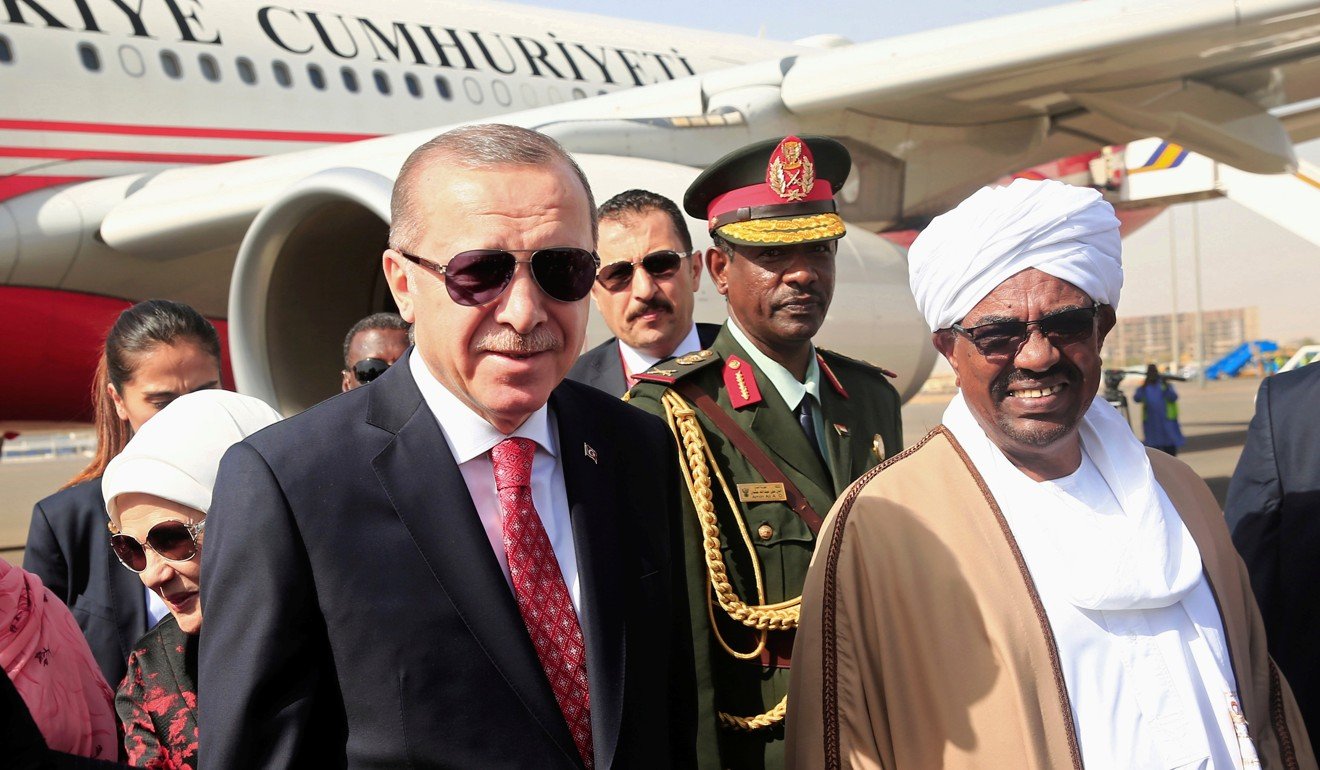 Hinting at a link between Saudi Arabia and the Turkish presence in Sudan, President Recep Tayyip Erdogan said on a visit to the African nation last month, the first by a Turkish head of state, that the ancient port of Suakin would boost tourism and serve as a transit point for pilgrims travelling to the kingdom’s holy city of Mecca.

Saudi Arabia and UAE, which has bases in Berbera in the breakaway republic of Somaliland and in Eritrea, fear the agreement will allow Turkey, with whom they have strained relations because of differences over Qatar, Iran and Islamist groups like the Muslim Brotherhood, to station troops close to Jeddah. Saudi Arabia and UAE have accused Qatar of funding the development of Suakin. Adding to the air of suspicion is the fact Turkey believes UAE supported a failed coup to topple Erdogan in July 2016.

The agreement is even more stinging because relations between Saudi Arabia and Sudan had significantly improved after the African country broke off relations with Iran in early 2016, an early Saudi victory in its battle with the Islamic republic for influence in Africa.

Sudan has since contributed 6,000 troops as well as fighters from the Janjaweed tribal militia to the Saudi-led intervention in Yemen. Under US President Donald Trump’s administration, Washington eased economic sanctions on Sudan in October at Saudi Arabia’s request.

Saudi Arabia this month agreed to re-establish banking ties with Sudan despite criticism of the Sudanese-Turkish agreement in the government-steered Saudi press and on social media. Sudanese President Omar al-Bashir has insisted his country would keep its troops in Yemen irrespective of the agreement.

Concern about the agreement is not limited to Qatar’s detractors in the Gulf. Egypt suspects the agreement will fuel a border conflict with Sudan over the region of Halayeeb. Sudan recently accused Egypt of deploying troops to the Sudanese side of the border and sending warplanes to overfly the coastal area.

Sudan last week closed its border with Eritrea amid reports Egypt, with the backing of UAE, had sent troops to Eritrea. Earlier, Sudan complained to the United Nations that a maritime demarcation agreement reached in 2016 by Egypt and Saudi Arabia infringed on what it claimed to be Sudanese waters off Halayeeb.

Egypt is further worried mounting tensions will complicate already sharp differences with Sudan as well as Ethiopia over a massive dam Ethiopia is building. Egypt believes the dam will reduce its vital share of Nile River waters that are the country’s lifeline. Negotiations over the dam are at an impasse, with Sudan appearing to favour Ethiopia in the dispute.

“Sudanese President Omar Bashir is playing with fire in exchange for dollars. Sudan is violating the rules of history and geography and is conspiring against Egypt under the shadow of Turkish madness, Iranian conspiracy, an Ethiopian scheme to starve Egypt of water, and Qatar’s financing of efforts to undermine Egypt,” charged Emad Adeeb in a column entitled “Omar Bashir’s political suicide”. The Gulf crisis, even without Turkey in the fray, has placed fragile peace arrangements in the Horn at risk. 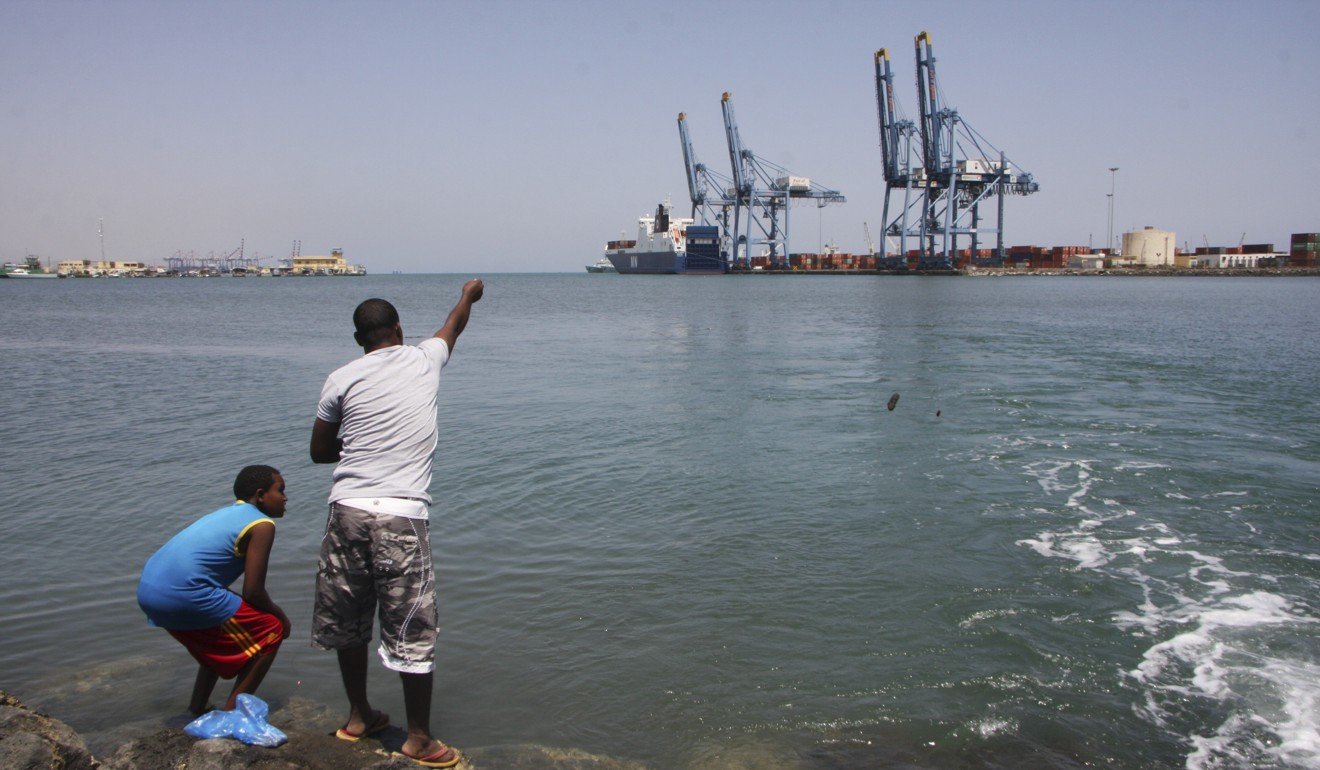 Men fish in front of a container terminal in Djibouti. China recently established its first overseas military base in the country. Photo: Handout

Qatar, in response to Eritrea and Djibouti’s decision to downgrade relations with the Gulf state when the conflict erupted last June, withdrew its peacekeeping contingent of 400 troops from the Red Sea island of Doumeira. Eritrea immediately seized the island that is also claimed by Djibouti in a move that could ultimately spark an armed conflict that may draw in Ethiopia.

While reaping the benefits of heightened interest, the Horn risks violent conflict in what has become a high-stakes chess game for both Middle Eastern and African adversaries. It is a game China inevitably will have to play a hand in, despite the risk of also being sucked into the region’s expanding battles.

“Post-Arab Spring … activism may unsurprisingly contribute to the militarisation of the Horn of Africa and, even more dangerously, alter the existing balance of power in this conflict-ridden region,” warned Patrick Ferras, director of the Horn of Africa Observatory. China’s military base in Djibouti, wittingly or unwittingly, positions the People’s Republic for what has become inevitable. ■

James M. Dorsey is a senior fellow at the S. Rajaratnam School of International Studies