Reports from Syria said an arms depot in Qatifah, about 40km (25 miles) north-east of Damascus, was hit, injuring three soldiers.

Israel has not commented, but after the reported strikes it said it had fired at a Syrian anti-aircraft missile. It did not report any damage or injuries.

Israel has carried out dozens of strikes on Syria in recent years.

How the Abraham Accord Might Impact the Middle East

It says it is acting to thwart advanced weapons transfers from Iran to the Lebanese pro-Iranian Hezbollah movement and the strengthening of Iran’s military presence in Syria.

The foreign ministry of Russia, a key Syrian ally, said it was “very concerned” by the alleged Israeli air strikes.

The statement said the unidentified airliners “not from Russia, were preparing to land at the airports of Beirut and Damascus”.

The Syrian military said the attacks were carried out from within Lebanese air space. Syrian state news agency, Sana, said most of the missiles were intercepted. 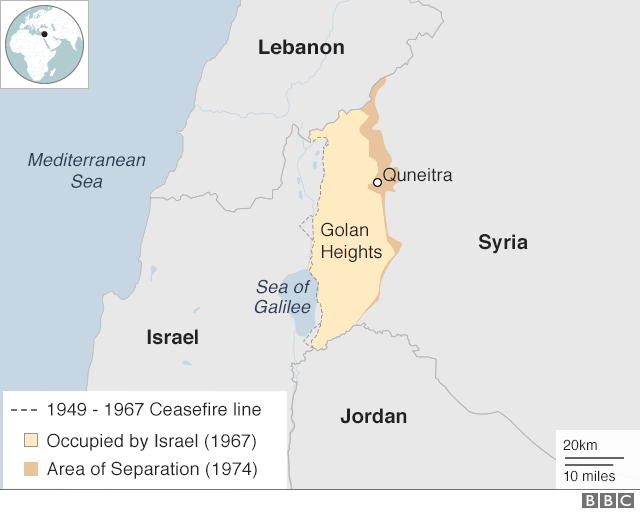 Video footage posted on social media shows an object moving over Damascus. Then the sound of a loud explosion is heard, followed by a burst of artillery shelling.

Newsweek magazine quoted an unnamed US defence department source as saying several Hezbollah leaders had just boarded a flight to Iran and were injured in the strikes.

The Israel Defense Forces (IDF) later tweeted that its air defence systems had been “activated in response to an anti-aircraft missile launched from Syria”.

An IDF aerial defense system activated in response to an anti-aircraft missile launched from Syria.

Israel rarely admits carrying out attacks on targets in Syria.

But in May, Israel said it had struck almost all of Iran’s military infrastructure there in its such biggest assault since the start of the Syrian civil war in 2011.

Those strikes came after rockets were fired at Israeli military positions in the occupied Syrian Golan Heights.