He may be ailing, elderly and rarely seen in public after suffering a stroke in 2013, but Abdelaziz Bouteflika, Algeria’s president, appears on course for a fifth term.

The National Liberation Front, the main party in the governing coalition, announced last month that he would be its candidate in next April’s presidential election. Other influential parties and the country’s main trade union have declared their support, and rare opposition protests against a new term for the 81-year-old leader have been suppressed.

But the prospect of another five years under an enfeebled president, with the levers of power in the hands of an opaque clique around him, is causing concern in the north African state, a key exporter of natural gas to Europe.

Critics say it threatens to prolong the political paralysis in a country facing the monumental challenge of transforming its oil and gas dependent economy to create jobs for millions of frustrated youths while living off declining currency reserves.

In a rare public appearance this month at a ceremony to honour martyrs of the country’s independence war, Mr Bouteflika looked frail and hunched in his wheelchair. Little is known about the true state of his health, but television has not broadcast his voice for years. Bernard Bajolet, a former French spy chief who once served as ambassador to Algiers, even claimed in September that Mr Bouteflika was being kept alive by artificial means.

The push to endorse another term for Mr Bouteflika despite his apparent ill health suggests Algeria’s political and military power brokers have been unable to agree on a successor, analysts and opponents say. 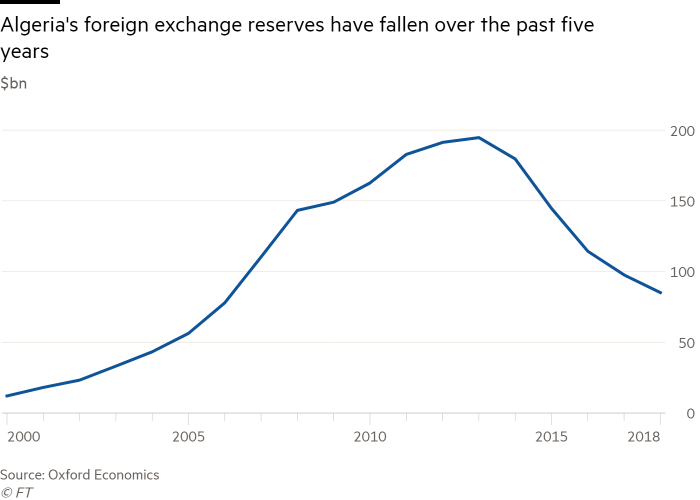 “The factions that control power do not have a candidate acceptable to public opinion on which they all agree, so it is the Algerian people who will pay the price,” said Soufiane Djilali, an opposition politician and a founder of Mouwatana, a group campaigning against a new term for Mr Bouteflika.

Mr Djilali said the authorities had suppressed an attempt by his group to stage a protest against a fifth term in the city of Constantine in September. “Police surrounded public squares and filled them with parked garbage trucks to prevent people from congregating,” he said. “They besieged our hotel to stop us from going out, then they arrested us and expelled us from the province.”

Many Algerians credit Mr Bouteflika with restoring peace after the political violence of the 1990s between radical Islamists and the military, in which some 200,000 were killed. He came to office in 1999 and his rule has largely coincided with a long period of high oil prices, allowing him to pour billions of petrodollars into public works, subsidies and benefits. Protests that took place in the country during the wider Arab uprisings of 2010-11 were subdued with a combination of repression and food price cuts. 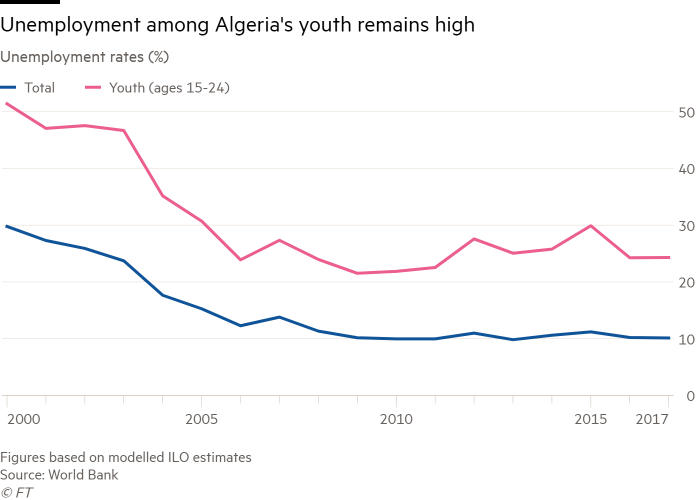 But Algeria’s stagnant, state-dominated economy faces multiple challenges. The government has been burning through its foreign exchange reserves since 2014, when oil prices dropped. Reserves fell from $178bn in 2014 to $88.6bn at the end of June, according to official figures.

Youth unemployment is at 28 per cent and economic growth was just 1.6 per cent last year. Algerians complain of the erosion of their buying power as the dinar has lost value. This year thousands of doctors and teachers went on lengthy strikes over pay and conditions and even army veterans staged protests demanding improved benefits.

Lounes Guemache, editor of TSA Algerie, a news website, said the economy was a major worry for Algerians. “We follow the oil price closely and when it went up to $80-$85, we thanked God. But the situation is bad. Unemployment is high and the young have [unmet] expectations.” 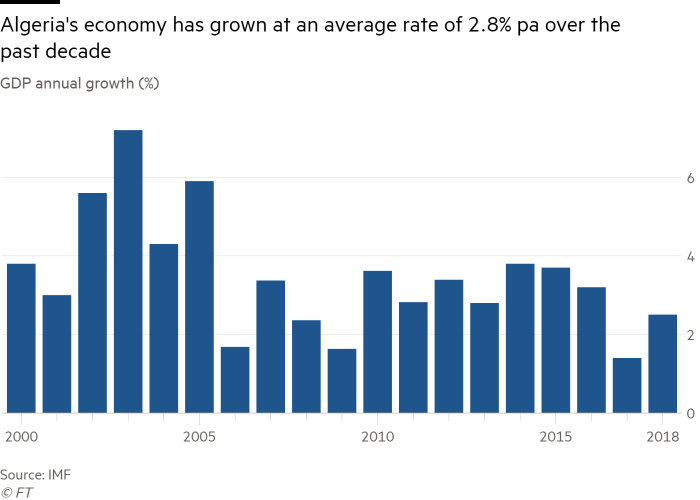 In a country with an opaque political system, Mr Bouteflika’s long illness has led to speculation about who is really in charge. Observers say the military hold powerful roles, as does Said Bouteflika, the president’s brother, who is known to be close to politically connected corporate barons who benefited during Algeria’s boom years.

Riccardo Fabiani, geopolitical analyst at Energy Aspects, a London-based consultancy, said that for the factions in power, a fifth term for Mr Bouteflika was the “least risky” option.

“It means the status quo,” he said. “A new president would be a leap into the unknown and could [upset the balance], as some would win and others lose out.”

The same logic was holding back economic reform, he said. Although the authorities understood the need for change, “no one has enough room to tackle issues which could trigger instability and allow factions to hit at each other”.

Observers of Algeria have long argued that the violence of the 1990s depressed public appetite for protest and instilled an appreciation of stability under Mr Bouteflika. But Mr Djilali says discontent is simmering below the surface.

“The collapse of purchasing power, daily difficulties and the provocations of officials have turned many Algerians against the regime,” he said. “There are signs we are sitting atop a volcano. You can sense it in chants against the regime in football stadiums, in protests in the south and in strikes.”